A surprisingly clean appearing 990. Expenses are minimal and the board is not paid. Rather than spending the money on payroll to educate people about global warming or bias or something, they actually gave the money to other charities it seems. They don’t seem to hold conventions that cost a lot and probably accomplish little and seem to resemble a grand party at times.

None of this excuses some of the Washington Post’s charges.

Some last comments on this:

Karl found the pause had not paused. What are the the polar regions? Where the TOA might as well be at the surface in Winter. Measure that TOA and you can measure the energy leaving. To find a temperature rise there in Winter is to find a flow increase of energy out of the atmosphere. That does not seem fair or accurate. To say GMST is higher as Karl did I think is stretching things somewhat. This is another way the GMST is not a good metric to use. If we were back in 1750 the poles would be colder. Less energy flow needed or wanted.

From a discussion on WUWT: 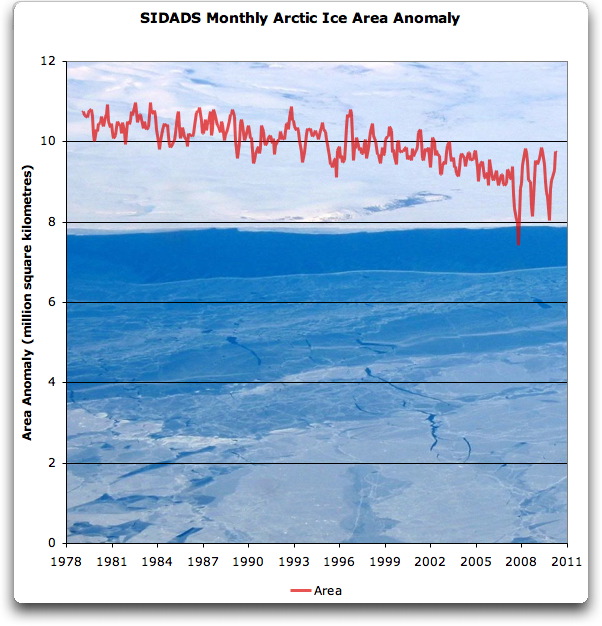 Here’s what it looks like to me. Before, more random. After, synchronization. Assume warming oceans. At some point the Arctic Ocean gets to work attempting to cool them more than they had been doing before. The sea ice now retreats when it can, during Summer which cools the Arctic Ocean. It still cannot stay open during Winter. Compare this to the temperature at my furnace’s thermostat. During mild Fall it wanders as the furnace is not running. As Winter starts, that temperature synchronizes. It drops until the furnace is commanded to start. It rises until the furnace is commanded to stop. When something is needed, in this case warmth, synchronization. Same pattern as in the sea ice plot. Synchronization might be described as a lot of similar things doing the same thing at the same time. The emergence of consistent melting followed by consistent freezing is this. Without synchronization, we’d have the more random prior data.

Words to the effect of, don’t blame climate change, rather reduce runoff pollution and overfishing. “Climate change is an excuse for doing nothing.”

Global Climate Models (GCMs) are suggested to behave chaotically. They are spun up at the beginning of their runs. If the initial conditions are too cold, they will in effect orbit the Warming attractor below more often. If the initial condition are too hot, they will in effect orbit the cooling attractor more often. When they are done spinning up, they will be stable in most cases while it is possible many orbit swaps are happening, they average out. Below the orbit is confined to the circles and at every intersection the orbit may swap to a different attractor. When I say attractor, think of a Lorenz Butter diagram or video. Below we have 3 lobes while the Lorenz model has 2. Whether or not an attractor swap will occur and how often can be calculated with Lorenz equations but the climate is much more complicated.

I am not saying that the GCMs where specifically designed to do what I suggest, but that in effect, that’s what they do. When we see the GMSTs wandering and not following a straight upward trendline, I think we should have an explanation of why that happens. It is also possible that a GCM can be thought of as having only one lobe of the Lorenz Butterfly. In that case, the attractor would have to drift to explain warming temperatures. Above we don’t need attractor drift. Stable means, it doesn’t change up or down. Warming is explained by spending more time orbiting the Warming attractor and the atmosphere warms. It is also possible that a GCM would have 2 lobes, a Warming and Cooling one. I also think it’s possible it could have more than 3 attractors. For instance:

Also consider scaling all this down to regional and local climate.

There are problems finding something in nature that behaves as in the videos (of the Lorenz Butterfly). Solar systems can though. But that involves gravity and I don’t know that we are going to see much of that on Earth. In the videos, temperature and humidity orbited in nice clean ellipses and we don’t see that in our weather. So considering what to do with that, let’s make the attractor 1/4 the mass of of what is orbiting it. Let’s pack the space with numerous attractors also with ¼ the mass. Call the Temperature and Humidity values TH. TH is now more like a solar system’s Sun but it has some serious other mass to contend with in this odd solar system. TH now appears to better represent things than the Lorenz equations when we look at processes on Earth. As it captures and ejects or leaves attractors, its movements seems more natural than the tight clean Lorenz orbits.

Tibetan Plateau:
“Measurements of stable isotopes (carbon, oxygen, and nitrogen) in tree rings indicate that tree growth has been stimulated by the synergistic effect of rising atmospheric CO2 and a warming-induced increase in water and nutrient availability from thawing permafrost.”

The Plateau is given 2 signals to stop sleeping, get moving. CO2 levels and warmth. Signals transmitted, received and acted on. Nice job Gaia. We are counting on you.