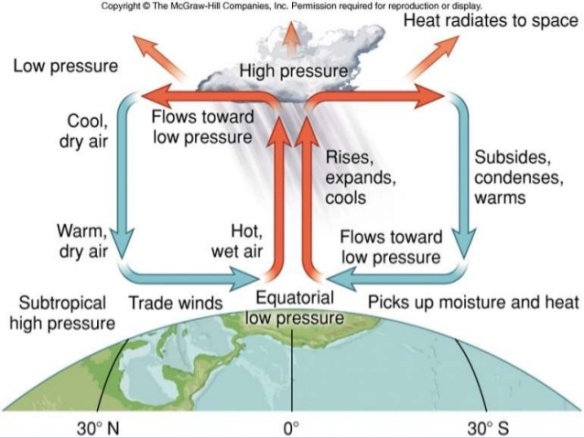 Left side is the Atlantic and the right side is Amazon Rain Forrest.

There was some discussion at Climate Etc about whether the scientists got the formulas correct?

That’s above my pay grade. I don’t even know what a differential equation is? If the 1st figure is correct, why not the 2nd one? Heat seems to emerge as the light water vapor condenses into water droplets. The 1st figure deals with it by indicating it escapes. We don’t doubt the Hadley Circulation and it is key to weather. With Hadley Circulation at the cartoon level, how does air move from a Low to the High above it? Energy from the Sun combined with water moves the water vapor upwards into the High. Then there’s the following lateral movement at altitude to an elevated Low. It then cools and descends into a surface High. Cool things sink, perhaps creating a surface High. In both cases, a Low’s air vertically move towards a High. Where to find one and only one driver in Hadley circulation? Best guess is Sun and water. The question we ask the weather person is where does weather come from? Let’s look for drivers, where the energy is. If there are formulas for Hadley Circulation they would seem to apply to Biotic Pump circulations. If those formulas aren’t sufficient, do we dismiss Hadley Circulation? Here’s one of the arguments that helped sway me toward favor the Biotic Pump theory. Oceans are our stalwart deep reservoirs. Slow to react and massive. Blazing Sunlight warms them a bit but their depth allows them to absorb probably more than transform by evaporation. Yes they definitely evaporate. Compare them to the Amazon Rain Forest which has a higher absorption and immediate use rate. X amount of Sunshine can cause higher evaporation rates than on the ocean. The Amazon Rain Forest is the sprinter of weather, while the oceans are the long distance runners. Gorshkov and Makarieva I think make the argument that their theory has explanatory value. Their theory seems to have a lot of pro-tree support. If I was selling trees, Biotic Pump, very important. Let’s assume their correct. We have some low regrets solutions we can roll out now. I believe their was a study that said it rained so much on Australia that it effected sea level rise. Planting trees. Who could be against it? It would be terraforming but with trees, not something more exotic. While some agricultural land could be given up, it might improve the situation for those lands that remain nearby through increased precipitation. Many rivers in the West suffer from not enough rainfall. Water is scarce. Water that could be used to grow food. If we increased rainfall, it might help refill our aquifers. So I am getting into the we can control weather area. With enough trees, yes.  Now if their is a problem with too much CO2 in the air, more trees should help us buy some more time for technological advancements to occur.

One reason I find this subject interesting is I look for regime changes in nature. The above could be thought of as a switch. A binary situation, not a linear one. The circulation reverses based on energy input reaching the surface.