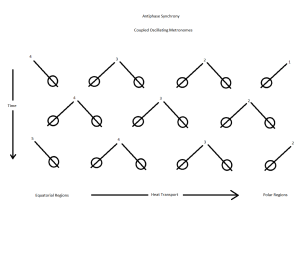 The climate is suggested to sometimes operate as above. Tomas Milanovic said words to the effect of, an infinity of oscillators to describe the climate. What do they look like? In the above, warmth is entering the climate in equatorial regions. It is represented by the numbers. It then makes its way to the poles where it would typically go out through the TOA. The oscillators are synched but in antiphase. Some have suggested this is a stable state.  Each grid of a global climate model could do about the same thing. Alternating between input and output cycles. Synchrony may arise from the energy flows. Next we have:

“Two coupling states are obtained, near phase and near phase opposition, the latter being stable.”

While we’d expect the second diagram to be the stable one based on youtube videos of metronomes, the study found the opposite for different conditions. I’d expect the system usually is in antiphase synchrony. Moving warmth to the TOA or oceans if you prefer. In phase synchrony is probably related to climate regime changes. There is a tendency to move to in phase but it may be marginally stable. Recall the youtube videos. How would you shake the whole array apart? In phase synchrony. Antiphase would not do that.

My idea for what the oscillators look like is to consider a molecule of CO2. It absorbs and emits infrared radiation(IR). Above, the numbers would be IR and the CO2 would be the metronomes. Consider extremely cold temperatures. The metronomes may slow and become sluggish and not be able to synch as easily as with warmer temperatures which have a faster and stronger beat. In the first case IR slows and in the second it speeds up. While the second diagram show reduced heat transport and a cooling reduction, that may also occur in the ice age direction as heat transport also slows. So ice might be represented by the second diagram. Ice might be considered stable not marginally stable as I suggested for in phase synchrony. I suppose I could bring up time frames or semantics. I’ll need to ponder this last point.